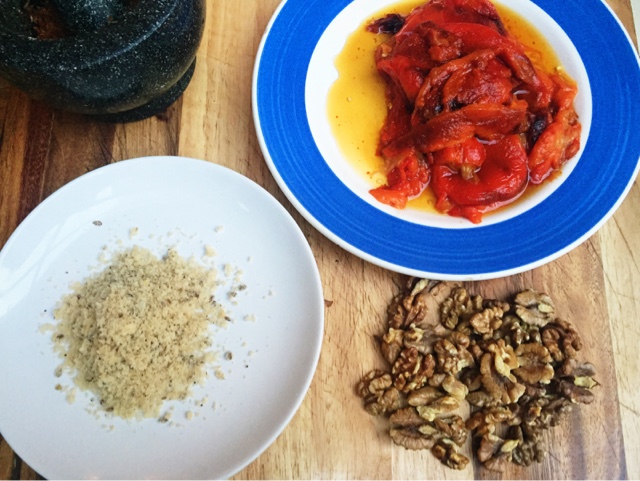 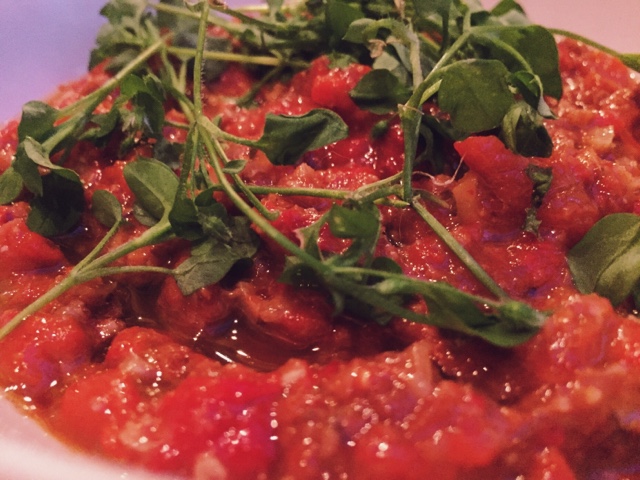 Muhammara is a dip made from roasted red peppers, walnuts, breadcrumbs, Aleppo pepper and then some variations depending on the cook. It originates from Syria and is popular in Palestine, Lebanon and throughout the Levantine.

Roasting the peppers until the skins are charred is a must for a rich smokey flavour. In order to easily remove the skins, once you remove the peppers from the oven, put them in a bowl covered with clingfilm. After ten minutes or so they should peel off easily. To avoid a uniform and boring paste like texture, chop everything by hand and combine in a pestle and mortar. If your mortar is not big enough, try a pestle and mortar for the initial stages and then move to a plastic bowl.

Preheat the oven to 200 degrees.

Place the peppers on a tray and roast until charred and blackened, approximately 30 minutes. When they are ready place them in a bowl, cover in cling film and leave for ten minutes. The skins should then easily peel off. Discard the seeds and white and keep the juices. If the black sticks to the peppers, wipe it carefully. If there is a lot of black wash carefully under the tap under a drizzle of water. Roughly chop.

First add the garlic and salt to the mortar and crush the garlic to a creamy consistency. Next add the cumin crushing it followed by the other spices. Add the peppers, breadcrumbs, lemon and molasses.
Once you have it to a point where everything is well combined but with texture remaining, stir in the walnuts and the olive oil. Add the juice from the peppers too (if they were particularly juicy peppers add tentatively!) Check the seasoning, drizzle with plenty of olive oil and scatter some complimentary green herbs (mine is with chickweed but mint goes well with it, as would Greek oregano and basil) and serve with the bread.

This will keep in the fridge in a sterilised jar for a week or so. The flavour also improves from leaving it for a day or so. Always serve at room temperature not cold. Interesting additions for flavour variation could be a some minced chilli for extra heat, 1 tbsp rose water or a teaspoon of preserved lemon instead of the fresh lemon.

Serve with a generous amount of good quality olive oil and plenty of warm pitta.