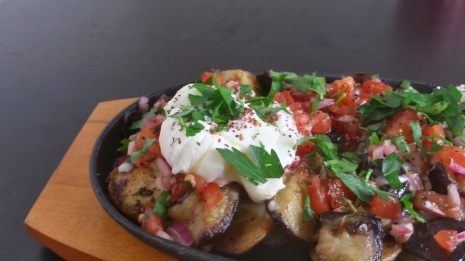 A lovely brunch dish from Ottolenghi. The components are all prepared separately and it takes approximately one hour to prepare, which maybe makes it a week day dinner but a weekend brunch.

It reminds me of the fried potato and aubergine pitta with tahini, lemon and salt my dad used to enjoy and my mum used to frown upon as the sandwich of heart attacks. This is possibly the same heart attack status but the salsa and green bits make it look a bit healthier at least.

First chop the aubergine in to a large dice and sprinkle with salt. Leave in a colander to drain for 20 minutes.

slice the potatoes into 3 or 4 slices depending on their size. Parboil them for approximately 5 minutes and drain.

Whilst you are boiling the potatoes, make the salsa. Put the tomatoes into boiling water for 4 minutes and then peel off the skins. Remove the seeds and the core and chop to a fine dice. Chop the onion to a small dice and de seed the chilli and chop finely. Combine everything, add the sumac, lemon, olive oil and set aside.

Make the tahini sauce by putting the tahini in a bowl and adding one clove of crushed garlic, Add the lemon juice slowly and whisk. It will become thick. Slowly add the water and keep whisking. Once it is a silky, creamy consistency (aka not runny but not like a paste). Add a pinch of salt and set aside.

In another pan add 4 tablespoons of olive oil, the potatoes and season with a teaspoon of salt and fry the potatoes until they are golden and crisp.

The eggs should take approximately 3 minutes to poach. Un peel the cling film carefully. I leave the egg sitting on the film so that it is easy to transport to the plate.